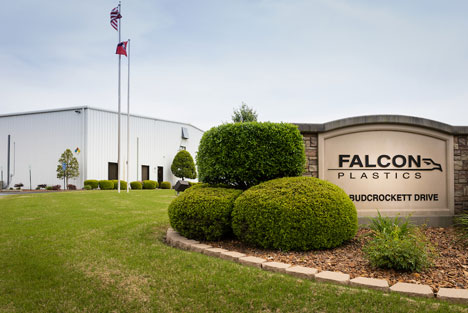 They come in different colors, weights, and sizes. Who knew these pellets could make so many different things?

“We melt plastic, push it into a mold, cool it down, and it forms a shape that is specified by our customer,” said Falcon President Jay Bender.

Since 1975, Falcon has used 1500 unique molds for thousands of specific products. Raven was an initial investor, Daktronics an early client.

“Daktronics is a great example. They’re using our plastic parts, so our product does end up all over the globe,” said Bender.

And, then there’s the other Brookings heavy-hitter.

“You go down the street a little further and get to Larson and the frames,” added Dan Costner, a plant manager at Falcon.

A trio of Brookings based companies with global significance.

“The great appeal is that it interfaces with other South Dakota companies in terms of producing key products to support their multiple products,” said Costner.

From pill splicers and containers to tackle boxes and toners, Falcon is always open to innovative ideas. Take for instance the GLIF and the Cosmonaut, two products for the iPhone and iPad.

“I can work on my phone, watch a video, or whatever I want,” said Bender.

Falcon is branching out too. In the past, it has strictly produced products for its clients. Now it’s developing its own, like ammunition trays.

“What we hope someday is we could sell these to some of the big names – the Remington’s or Winchester’s of the world. Then, we’d be talking about millions instead of hundreds of thousands,” said Bender.

So, what makes this manufacturing company soar during a struggling economy.

“We’re taking advantage of technology to try and be as efficient and cost effective as possible,” said Bender.

Plus, it thinks of its employees productivity.

“Nobody stays at a work station longer than two hours every day,” said Costner. “By schedule they’re all moving around reinforcing what they know and reinforcing each other.”

And, Falcon rewards them with profit-sharing.

“You’d be amazed how much incentive that can provide,” said Costner.

Best product, best price possible is Falcon’s mantra. Being South Dakota made has a lot to do with it.

“The business climate is really good here,” said Bender. “The state is really encouraging on trying to help businesses grow. We like South Dakota and Brookings, in particular, because of the proximity to the engineering school. And, of course, the work ethic here is second to none.”