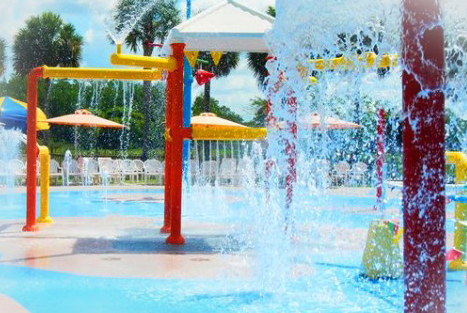 Think of it as tile with a twist.

At a water park, around a pool deck or in a shower – essentially anywhere with water – the signature product of Minnesota-based Life Floor get less slippery the wetter it gets.

“We make a tile which is very unique for the aquatic servicing business,” CEO Jonathan Keller said.

Until recently, it was made in Vietnam.

But thanks to a variety of South Dakota partnerships, Life Floor’s products for North American customers now are made in Madison.

The relationship started a couple of years ago when Julie Gross, executive director of Lake Area Improvement Corp., learned about Life Floor at a networking event in the Twin Cities.

“I go there three times a year and hear from companies like them,” she said. “Some are startups. Some have manufacturing overseas. Some are from communities in Minnesota or Wisconsin and want to either expand or move their business.”

The Life Floor product has been around since 2005 and was manufactured overseas. The current owners bought the business about four years ago and were hoping to bring some of the manufacturing back to the U.S.

But bringing the business to South Dakota required a local partner. Gross reached out to Ken Hatlewick, manager of the Falcon Plastics plant in Madison, who agreed to take a look at the product.

Executives at Brookings-based Falcon started meeting with Life Floor and figuring out what it would take to manufacture the tile in Madison.

“We determined we could actually work together,” Hatlewick said. “We had to open up space for them. We’ve sampled different things, built prototypes, really just walking through the process with them. They’re a great bunch of guys to work with.”

The company looked at moving to several Midwest states. South Dakota offered a business partnership with Falcon as well as lending assistance from state and local sources. The project required investment in equipment and was almost entirely funded with South Dakota-based loans, Keller said.

Overall, the process has adapted well and become cost-competitive because of U.S. efficiencies and automation, Keller said.

“There will be a slight increase in price, but we think the value will be more than justified, and we think long-term we’ll be very competitive with our Asian manufacturer.”

The product is poised for growth.

“We wanted to prove the products in those environments first,” he said. “The thought is if it can work in a big water park it can work at your local municipal pool, fitness center, country club or your own home in a shower or around the pool deck.”

Along with being more slip-resistant as it gets wet, the tile is cushioned, Keller said.

“So if you fall, you shouldn’t get hurt. And we can make it look like stone or wood or coral, so it looks really nice, and it holds up in the aquatic environment.”

Gross learned the tile is used in Madison at the AmericInn Hotel & Suites, where she said reviews are positive.

“It’s a great product,” she said. “I can see why they love it and why it’s becoming an industry standard. It just feels better on your feet. You don’t slip. And if it cuts your accidents down, why not?”

While the initial expansion required only a few employees to be added at Falcon, the hope is to create more jobs, Gross said.

“They’ve got a solid business plan. They’re growing. They’re not trying to grow too quickly, but sales are definitely doing well. This can be a great model for other companies. A lot of people think it’s so much cheaper to do business overseas … but they can prove it is less expensive or the same to do it here. That’s just a really great story.”